Sinki’s Eyes for An Hour 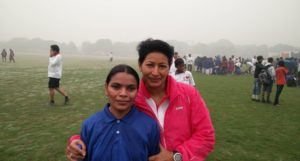 Yesterday, I had the privilege to help create a beautiful moment for Sinki- an effervescent and happy go lucky girl and being included in her world. Both my husband and myself had registered as a volunteer for #salwanmarathon where volunteers run with children who are visually challenged for a distance of 3 km. We both were looking forward to run for a cause and help another fellow runner.

As the group of visually challenged girls came towards the start line to pair up with the runner buddies, I looked around to choose my running partner. Just then I overheard a giggle followed by a voice- “I will run very fast”. That was when I went up to Sinki and told her that I would help her run fast if she agreed to make me her running partner.

We got talking and that’s when I learnt that Sinki could run 100 m in 15 sec and I  started having doubts whether I was the right match for her Sinki belongs to UP and come back early from the Diwali break so that she could participate in the run. . She clearly was determined to one of the top finishers .

Before the run was flagged off, we had prominent athletes like Olmypians-Shiva Thapa ( Boxer) , Manpreet Kaur ( National Shot Putter) who talked about the importance of sports in everyones’ lives.. Sinki held my hand throughout the talk and I could feel her eagerness to run..

The run was flagged off and we both took off . Sinki was very alert and ran according to my instructions. She ran the first 2 km almost non stop but then ordering zithromax online became very tired and started walking . With a km to go, I kept pushing her to go on and described the girls ahead of us .Each time we crossed runners ahead of us, she smiled. She was overjoyed when she crossed her running friend – Meenu from school and gave a huge smile.

With 400 m to go, I got the volunteers around to tell us the distance left.. Everyone cheered for Sinki and we charged up to cross the finish line .The officials then told us that Sinki came in 2nd and another girl from her school- National Virjanand Blind Girls School, Vikaspuri got the 1st position.

Sinki was ecstatic with joy and got busy telling all her friends about her podium finish. It was a mere interaction of 90 minutes and though I do know that I was a catalyst in her first ever podium finish but what Sinki has given me is far greater than what I could give her. I learnt my lesson in #inclusion in the real world. We often talk about #inclusion at work and personal life but true inclusion is what Sinki did for me after all she welcomed me with open arms in her world. Perhaps, it’s our eyes which bring up the #unconscious biases as I could see only warmth in Sinki’s eyes and nothing else.