Silver is the new Gold 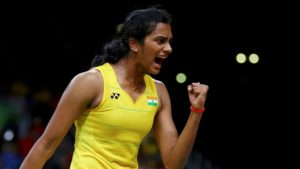 There is Rio 2016 fever that  has gripped the world these past few days, with medals being won and records being broken. The one name that has been there on every Indian’s lips is Sindhu. She was the top searched athlete in Google India. She has indeed achieved something that no Indian athlete has achieved – an individual silver in Women’s Badminton. But in winning the silver, Sindhu has achieved much more than that. She has started a revolution – hopefully we will see more and more Indians take up sports seriously. And more importantly, we will see more corporates and the government working together in developing the infrastructure, and nurturing and grooming Indian sporting talent for the future.

But as all of that starts taking shape, there are some lessons for today’s leaders and managers from Sindhu’s saga – here are some of the Sindhu-isms:

Pursue with a Passion: Sindhu’s parents were star volleyball players but she chose to take up Badminton, having been inspired by P Gopichand, one of India’s top Badminton players. Her passion and commitment for the game was reflected in the fact that she used to wake up at 4 am and travel 56 kms every day to her coaching camps, and be on time every single day. That same passion and the burning desire to do well was reflected in her eyes in every single point that she played in these games. In today’s corporate world, there is very little to choose between 2 managers, and what makes one stand out and succeed is really the attitude, the passion and the can-do spirit.

Mentor matters: Sindhu found the perfect coach in Gopichand. Having been a champion player in his own right, he knew what it takes to get there and he made sure that he passed on all of that to Sindhu. He put her on a strict diet and also focused on building her strength and stamina to enable her to reach where she has. He himself went off carbs so that he could buy azithromycin 500 mg online stay fit and be an effective sparring partner for Sindhu. In order to succeed in today’s world, one needs to learn from others, shorten the learning curve and find out-of-the-box solutions. And having a mentor can be a great way to do that. A mentor can leverage his/her experiences and guide you through potential pitfalls and lead you on to the path of discovery and fulfillment.

Your past ranking need not reflect your future potential: Sindhu came into the Olympics ranked No. 10, and on the way to the finals, she beat the No. 8, No. 2 and the No. 6 players and narrowly lost to the current world No.1 player. She was focused on achieving her goal, and to her, these were mere numbers. Managers shouldn’t let their recent performance negatively impact them. Instead they need to have a “growth mindset” and see what it takes to succeed going forward. The trick is not to be over-awed by the competition, but to respect it, and do what it takes to deal with it.

Value your Values: When Sindhu lost the final point, she would have been terribly disappointed. She experienced the disappointment and then picked herself up, crossed over to congratulate her “weeping” opponent, and then put her racquet away safely in the corner so that no one would step over it. How is that for sportsmanship – that comes from the core values that ground you to be a great human being. It’s a corporate jungle out there, with everyone in a rat-race, but it is important to be grounded, hold on to our Values and do the right thing. While this may not guarantee instant success, it will certainly put us firmly on the path to success.

Sindhu might have eventually won the Silver, but for the 1.2 billion Indians, she won the Gold and more. She has showed us all that with the right combination of skill, commitment and passion, nothing is impossible. Watch this space, Tokyo 2020.