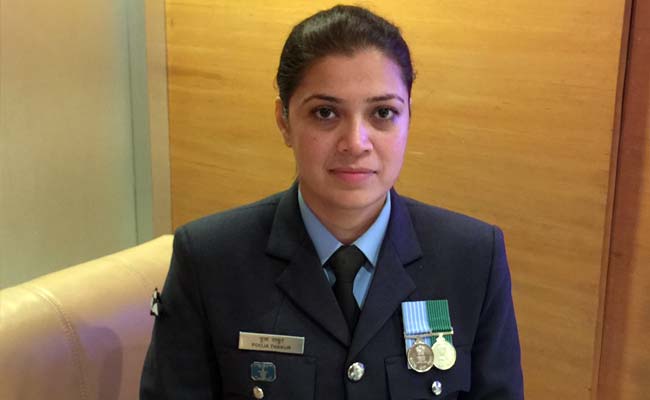 The Armed Forces opened its doors to women in 1992 and since thenthey have come a long way whether it is the steadily increasing number of women officers or a woman officer, Wing Commander Pooja Thakur, leading the ceremonial Guard of Honour for the first time for US President Barack Obama at the Rashtrapati Bhavan – reflecting the theme for the years Republic Day parade Nari Shakti (women power).

Tell us about your journey. How did you choose the path you are on?

Well, I have served in the Indian Air Force for 13 and a half years, I am a para jumper. My father was from the army. I had always lived the army life. Seeing my father go out in the uniform every day made me want to get into the armed forces. And then army families have a different kind of an inclusive culture which is not dependent on the place you are from etc. – its Fouji culture. The broadmindedness, the adaptability, meeting so many people from everywhere and watching them become your family was very alluring for me.

What were the challenges that you faced on your way?

Not the conventional ones but once you get into the forces, there are hardships. The training is tough. Then every day is a new day, you dont know whats going to happen.

How would you compare your career with some… lets say a more conventional one?

I dont know a lot about other jobs. I know a little bit about corporate sector because my husband is there. I cant draw a parallel between our kind of life and any other job because probably others are jobs and ours is our way of life. Its not about the number of hours we are staying in the office; it is on 24 by 7. Not just as 24 by 7 duty but also 24 by 7 family. It doesnt happen outside. Our social life is intertwined with our work.

What do you love the most about your work?

Being in the uniform is the best part! The pride in uniform is not comparable. Its an entirely different feeling to see people look up to you.