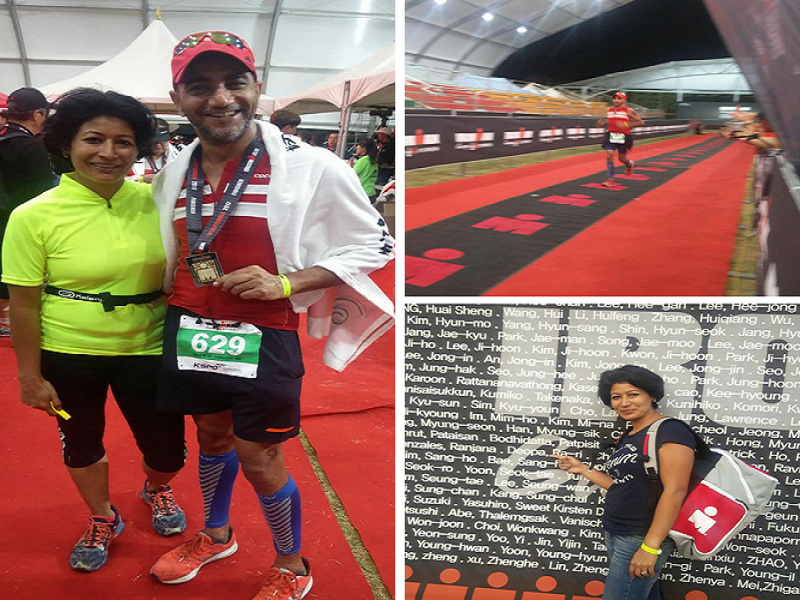 Sitting in the train from Gurye to Seoul, I can see my Ironman event on Sep 10th flashing by. Both Nitin and I had signed up for our first #ironman at Gurye in South Korea post completing our #ironman70.3 #Bahrain in Dec 16. We believed it was a relatively flat bike course and the swim was in a lake, reasons good enough to sign up for our fist IM event in Gurye.

As the event became closer, we realized that it was a majority rolling course which meant the difficulty level was higher and the event would be more challenging. I don’t fear the open water as much as we have been swimming at least twice a month in Lake Bhardwaj along with our Chief Mentor- Mohit Oberoi. The swim practice in Jirisan lake on 9th Sep went well and I was confident of finishing it under 2 hours. It was the bike leg i was afraid of coz I had a fall in Bahrain just 5 km in the bike leg and I was planning to be super careful this time. I was confident of finishing my run no matter my condition so it was the bike leg which was my concern area as flats can cost you time. A recce bike ride and run also turned out fine except for Nitin having bike issues which were fixed by the Mechanic at the Expo.

Come Sunday wearing our wetsuits, we waited for a call out for the rolling start but it didn’t happen and we jumped in with a bunch of others. My objective was to be closer to the yellow buoys which meant being with the herd. A few hundred metres into the swim, i was forced to change my strategy due to repetitive kicking and pulling. Being slightly away from the herd made the swim more smooth and swam like i never swam even in my training. As I crossed the half way mark in the out and back course, I could sense fatigue setting in but I kept pushing myself and when I got on the pontoon , my Garmin read 1.37 hours for 4.1 km . I was ecstatic as the first hurdle was out of the way and I did way better than my target. It was a “High Five” moment for me and i did say WOW to myself.

With an extra 23 min in my kitty, I set out for the bike leg. My objective was to maintain a pace of 25 km an hour. I knew the bike leg would be tiring with the rolling terrain but with consistent efforts i was confident of cracking it.  The first uphill was a killer one with the steepest incline and I was literally struggling to stay on the bike and pedal my way up. The three loops of 43 km each were also rolling but not as tough as the first. I maintained my pace to 25 km per hour till 100 km and then it dropped to 24.3 by 160 which meant a target finish of 7.3 hours, half an hour extra than what I had accounted for. At 160 km mark, i was at 8.2 hours into the event and 20 km to go in 1.4 hours. There was enough time to finish the last 20 k.

But it was not to be, at 170 km on the highway and just 10 km to the finish line. My bike gave up. The rear wheel got stuck to the frame and just wouldn’t move. I dragged my bike a bit and then I could hear the whoosh sound as the tire became flat. I was in two minds whether to change the tube or drag the bike along and try to finish. My speed had dropped to 6 km an hour and there was an incline on the highway. 8 more km to go and I had an hour and few minutes. With a speed of 6 km an hour it was unlikely that I could have made it. So I fixed the tire hoping the wheel would also fall back in place. Earlier, a volunteer and a fellow triathlete tried to help but they weren’t successful too and then I saw Nitin. I had no clue that he was behind me. It was like my knight in shining armour moment for me and I became hopeful of the bike being fixed and completing Ironman.

Alas, he also could not fix the issue and I decided to drag it. He promised to send help once he reached the transition. At 3 km to go, I saw Carl who was one of Ironman officials on his bike. He clearly told me that I had to finish with my own bike and with 3 km to go and the cut off in 10 minutes I simply couldn’t make it. I wanted to disagree but how could I. I got on his bike with my bike and rode to the transition area.

My Ironman dream was shattered at 177 km and with just 3 km to go. I was so close to the finish line of the bike leg yet those last 10 km seemed forever.

Carl offered me to finish the run course but I was not simply motivated to do so. A few minutes later, I met Nitin at the aid station and he was so disappointed on my DNF. We had a target of doing this together and now he was alone in this journey.

As I walked to the run area, I was pleasantly surprised to see Akshay Khanna, a dear friend from WDR.  He had happened to be in Seoul for a conference in the previous week and both Akshay and his brother – Ankit had driven down from Seoul to be our cheerleaders in Gurye. We were supposed to meet post the swim however when I didn’t see them during the bike course too, I thought they have left.

I was down and out but the moment I met AK Brothers and shared the unfortunate incident, i felt slightly better. I got to know how Wdrian’s were tracking our progress and cheering for us through the event. Once they left, I started tracking Nitin on the Ironman tracker though I knew he was mentally tired after the bike fiasco but the tracker showed he had picked up speed. I met him at 17 km and he confirmed that he didn’t seem mentally drawn to run the course. I egged him on to finish it which he said he would but by walking. We walked for a loop of 12 k and we kept chatting all the way about the unfortunate events of the day.

The entire episode has got me thinking whether I could have done something different during the training or in my bike leg. For sure, I could have been faster but would that have meant, the bike not breaking down. I had time to drag the bike to the finish line but i wasted time trying to fix it. Was that the right thing to do? I don’t know and I can only say that I wasn’t destined to become an Ironman this year in my first attempt. I am quite aware that Nitin is extremely unhappy with his performance for reasons beyond his control.

Just yesterday, our daughter Myra called Nitin -Ironman papa and I look forward to hearing -Ironman Mama soon. Missing out on hearing the words “You are an Ironman” is a big loss and something i will yearn for next year. This is surely unfinished for both of us and we have to work towards coming back even stronger.

It’s been a lot of hard and gruelling work during the training for that coveted Ironman title. Our kids, families, friends and office colleagues have been a part of our journey and while we were out doing this for ourselves. The stakeholders were many more.