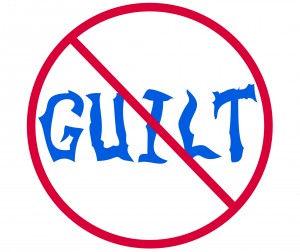 It was once again the same thought knocking in my mind, this would happen time and again – the alphabet ‘G’ was trying to make noise in the loudest possible manner and was dancing in-front of my eyes in absolute bold. I realized this was happening very often. I was once again getting into the grip and embarking on my guilt journey. The alphabet ‘G’ was ‘Guilt’ for me. I carried the guilt of not being able to spend much longer hours in the office as there was always so much to do. More guilt got added as I was not giving quality time to my son and encouraging him through his assessments.

I was guilty of finding very less time to prepare my husband’s favorite dish at home. I was guilty of not being with them in mind and body over the weekends as there would be some random chores to be managed and something would keep playing on my mind. I was guilty of putting on those extra pounds and not able to exercise regularly. I was guilty of not devoting enough time for my friends and extended family. I was guilty of not being able to do things that I so wanted to do – dabbling with paints, dirtying myself in the garden or soiling my hands with the plaster of Paris. Life could not have continued like this, slowly it started showing and taking toll on my health. Then came the turning point, my visit to my doctor, she was a woman before she was my doctor. Her only prescription for me was to change my life-style. I had to reflect, I had to find time for myself. It was definitely time for introspection and thinking objectively, it was the time for de-cluttering and charting out my priorities. It was the time to condition myself and not being bothered by ‘G’ and this process had to start with testing my perceptions. I sat down with my son, we had a discussion, I told him how bad I felt at times for not being able to spend time with him on his studies.

His response was the most unexpected, his way of looking at things amazed me, he was rather proud that he does it on his own and could proudly declare to his classmates and teachers that all his scores were his efforts. He was happy that I was there for his project-work and was there when he was stuck somewhere. Suddenly, my ‘G’ in this seemed a little un-founded. I realized my talking to him and his assessment of me as a working mom and being independent was just fine with him. This got me thinking that at times we surround ourselves with thoughts and perceptions which are not real. This was my time to find a quiet corner and list down things that make me feel miserable. I sat down and drew out the list. As next step, I embarked on the journey of actually speaking to everyone around me, who featured in that list, my parents, my husband, my son, my friends, my boss, my team, my colleagues, everyone. I wanted to understand their expectations. I realized there was no real reason to feel guilty and there wasn’t much evidence that should panic me. The world’s worries were not really resting on my shoulders. Everyone around me did understand. We all are living in the era of multi-taking, where the pace at which we are running sometimes is by choice and sometimes is the need. We are trying to do too many things in too less time. At times, it is required that we set our own pace, it is ok to pause and rest also. In a nut-shell this is what worked for me: