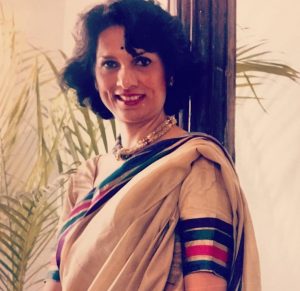 Bina Ramani is a woman of iron will power and the most fearless lady you will ever meet. An internationally reputed visionary in design and lifestyle concepts, she is known for setting trends and inspiring change. An author, designer,  artist, social activist and entrepreneur with over 40 years of experience in global luxury and hospitality, she is a force to reckon with.
Her many shades of passion and creativity made her the Bharat Nirman Business Woman of the Year 1992 and the first and only designer to have her designs featured on Vogue magazine cover.
A serial entrepreneur and philanthropist, she is the personification of Indian and Western Lifestyle Fusion. With her fashion studios named Once Upon a Time in New York and New Delhi, she took the authentic Indian craftsmanship to another level by restoring discarded saris and textiles and transforming them into bespoke Vintage Style – ‘ East-West Fusion Wear, taking New York by storm.  In 1988, wives of 12 powerful US senators modelled in the ‘ Bina Ramani’ look for the charity she had organised for Washington DC’s most prominent residents. 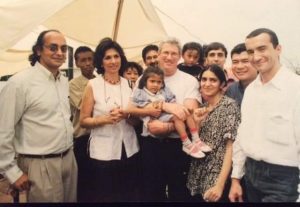 None other than Harvard University invited her to showcase her collection in an unprecedented move a year later. She never did a show without donating part of her sales to the neediest cause of the time. Known as the Godmother of Fashion in India, she was a source of inspiration to thousands of young designers. Her unique semi-precious necklaces adorned the neck of Mrs Indira Gandhi, who admired her experiments with occidental cultures.
Her newest passion is  Malabar Secrets, a brand that she created two years ago,  that embodies the ancient Indian Art of Blending spices, used over millennia to enhance well being. In her effort to introduce healthier alternatives into the world of food and beverage industry, Bina has designed a series of mouth tingling concentrates, combining six to nine natural flavours of spice, fruit and flora per dropper bottle. Bina’s company brings India in a bottle through Ayurveda in its most modern context of palate culture,  by creating a perfect interplay between leisure and health. Her innovative formulas are based on the ancient wisdom of Ayurveda Masters and offer numerous health benefits from detox, digestive aids, healthy organ functions to memory boost and more!
Before venturing into entrepreneurship, her career started at the age of 28 as the Director of Marketing and Public Relations for the Taj Group of Hotels, New York and Head of Operations, the United States for Binatone Electronics. One of the most outstanding achievements during these eight years was the establishment of the first deluxe Indian Restaurant Raga in New York’s Rockefeller centre. 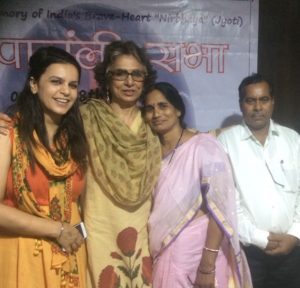 Besides being a businesswoman inside and out, she is a social activist and philanthropist.  She has been a  Heritage Property Restorer for over three decades now. One of the most prominent projects has been the complete transformation of the Hauz Khas Village. Her Hauz Khas transformation project and establishment of Qutub Colonnade, Style Mile made her a visionary and trendsetter in the arena of lifestyle and property trends. It inspired several other villages to take the cue and transform them into stylish, commercial success stories. Her work was honoured by the prestigious PATA Prize for Heritage Revival.
Bina is known in all circles as the one who stood up against a mountain of threats and corrupt powerful political forces to stand for integrity and truth as an endangered witness, in India’s most sensational, The Jessica Lal murder case, and survived imprisonment, threats to her life and shutting down of her businesses.

Bina’s life journey is a colourful canvas of success and struggles. She is an exceptional example of women conquering the world purely on the basis of passion, patience and persistence.