Do you have a D&I epiphany moment? 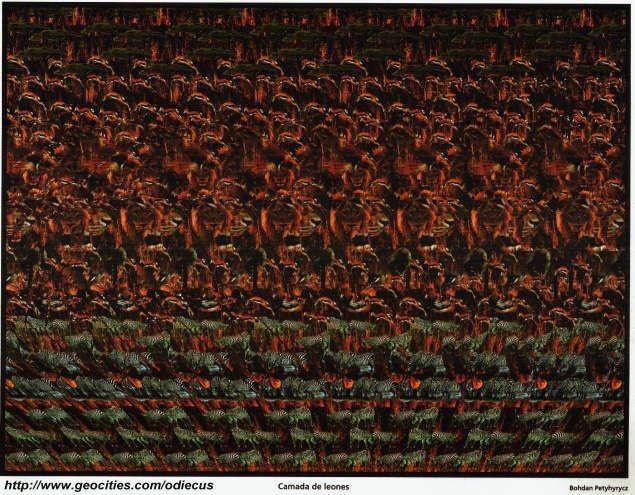 Many years ago, one weekend evening, we had gathered with families at a friend’s place. The friend’s preteen children were crouched over a large book of autostereograms or what is simply known as the Magic Eye book. These books have several Single Image Random Dots Stereograms (SIRDS), another name for autostereograms, that can keep one engrossed for hours trying to locate the evasive 3D scene in a 2-dimensional image. The trick was to look at the 2D image in what is called a wall-eyed (and rarely a cross-eyed) view. In other words, or at least how I tried it, is to gaze at the image by focusing on a point behind the image or the printed page. Try to spot the shark in this one here.

The book was passed around as we went through each page and each image. Every kid and every adult tried to locate 3D scenes with the mighty Savannah lions, which was the theme of this particular Magic Eye book. When my turn came, each and every time, it proved completely elusive. I held the book close to my eyes, and then away from them. I went directly under a lamp and then held it against it! Nothing, no image popped out or floated up or emerged as my friends goaded me on. I did not spot a single lion in this virtual sitting room safari – zilch, zero, nothing, nada! And I gave up.

Post dinner, I gave it one last glance with no expectation (no pressure, I thought to myself). And viola, there it was! One majestic, thickly maned, multi-hued king of the jungle! I turned the page and gazed at the next one – and out popped the lion and its entire brood! And then the next page was as easy as winking. And the next and the next until it was time to go home!

This instance of a series of tries finally followed by a series of successes, came up as I pondered over how several people struggle to understand ‘Why D&I?’.

While minorities in the workplace silently or vocally brave exclusion – unconscious, cultural or systemic, the majority will be typically impervious and largely not aware of the privileges they naturally enjoy. Organizations may encounter disinterest, indifference and even resistance toward enhancing diversity and inclusion in the workforce. Leaders themselves may not be sufficiently aware of what really needs to change on the ground and how they need to lead that change. In simple words, they don’t really get it.

In a simplistic scenario focussed on gender diversity, which in turn is equated with women, this is even more true in the current times. At least the urban, educated, working woman in a new age company seems to have all the privileges that a man has. Freedom to choose their career, to be part of a top team, to grow professionally, to lead teams and businesses are all apparently within reach for both women and men.

Leaders may get defensive at how things were in the past and at the status quo. And would say that there is no discrimination and no design to prevent women from growing and leading in the company. They would entirely miss the point that it is not about raising an alarm about the lack of women in the workplace and in leadership positions. It is also not about blaming them or anyone for the past or the present state of affairs. It is about the benefits of having more women and diverse people on the team. These benefits may not be clear to a leader or a manager that has not given it deliberate thought.

Here is an account by one such leader, who was courageous enough to admit to his initial befuddlement and how one fine day the penny dropped. It clearly illustrates that the more a person approaches D&I without guilt about the past or the present, but with a willingness to listen, hear and empathize, the more successful they will have in being inclusive. That to have minorities at the table is the only way to hear everyone. And to have everyone heard will not distract from focusing on the business of the organization, but in fact, create more focus and better outcomes for the business. Someone rightly said that D&I is not a checkbox, but the ‘opening’ of countless boxes. Cliched though it may sound, D&I is a journey and there is never a destination, and you are never ‘done’ with D&I.

A newly appointed executive heading a large business unit in India was bemused by the organization’s priority to build the women leadership pipeline. As a sort of an experiment, he anyway included a couple of talented senior women in his leadership team, so far, an all-male group. With the different thought processes and ideas that the women brought in, the leadership team started warming up to the idea of diverse people in the group. In a couple of years, the said executive was completely bought in and cascaded the idea of diverse teams beyond his own. He related this story of transformation every single time he was called upon to talk about women leadership or D&I in the workplace.

The two examples above, demonstrate how two privileged men started out by simply not comprehending the need for D&I. They struggled probably like I did as I gazed at the 2D image in the Magic Eye book, till my head ached. But then, you do not get it till you get it! What triggers the light bulb moment can be different for each person, but when it turns on, it stays turned on. The leaders applied thought and acted on it. One, by reading every article that he could about D&I, and listening to minorities in the organization. Another, by including two women in his team. Still, it took some time, more interaction and lots of hearing and listening to diverse viewpoints.

And then, in one inspired flash, or in a culmination of several, they simply got it! And once they did, they never looked back again. They saw the benefits of a diverse team repeatedly and experienced it distinctively. This, in turn, led them to influence an organization-wide culture change. Subsequently, it came to them very naturally, and they continued to cascade with a multiplier effect and on an ongoing basis. Very similar to how I experienced the remaining autostereograms in that book. When I saw the lions in 3D splendour, page after page, again and again.

If you have a D&I epiphany story, do share it in the comments below.

If you don’t have one, it may be just around the corner – maybe through an incident related to or experience of your parent, sibling, friend, colleague, partner, spouse, child or relative. Maybe through one of your own. Or through several experiences.

Until then, here is an animated autostereogram for your amusement – this shark moves!