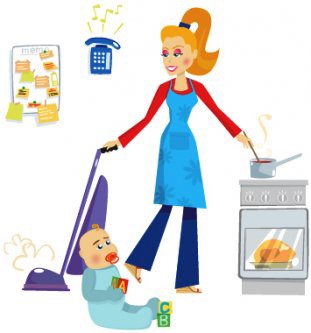 #typical homemaker: Her day starts even before the mighty sun illuminates the earth and even before the mother hen fetches the first morsel of food for her chick.  For a typical homemaker day starts with packing lunch boxes, laying breakfast, dropping kids to bus stop, managing the domestic maids and presswala, answering the doorbell several times in a day, dusting, hauling laundries, carrying garbage to the collection point, keeping the house in order and doing other similar chores for the house. These are jobs that the women typically does while being in home. Then there are errands like groceries, bank or local administration jobs, shopping for gifts and household, taking kids or pets to the doctor, etc requires her to step out of the house. If she knows how to drive, she can independently accomplish the jobs otherwise she travels by the local transport to her destinations.

Now to my understanding these are physical and laborious jobs, so she needs to be fit and healthy to perform these roles. However there is another important role of a mother or a homemaker. It is the emotional, psychological and mental support she extends to her family and more so to her young and feeble children.  The bedtime stories she reads out to them, the shoulder she gives to her adolescent son or daughter, the way she minds her own conduct and language while talking to her children, the soft skills of etiquettes and behavior she gives to her children or maybe how she simply imbibes the values of family and relationships to her children are some of the other roles that a homemaker plays.

Some of the readers here might think – so what’s the big deal? We all have been doing it and so have our mothers.

Being a homemaker myself, I see nothing wrong in schlepping the groceries or washing the vessels. We are doing it for a unit, which we willingly started. This unit may be nuclear or joint; irrespective we nurture it, love it and see to it that it is guarded against all odds and evils. This relentless passion to protect our families has a beautiful mention in one of the stories of Chatrapati Shivaji the Great.  During his reign a milk woman by the name of Hirkani Burz had like most regular days come to the fort to deliver milk.  But by the time she retraced her steps back home, it got dark and by the order of Shivaji Maharaja, the royal guards shut the giant fort gates. Even after much pleading and beseeching, the guards did not open the door and told Hirkani to stay the night in the fort and leave early morning.  Hirkani got anxious for her little baby. She had to reach back to attend to and feed him. She got restless and without batting an eyelid she perched on top of the 2700 feet, suicidal cliff and treaded her way down on the other side of the insurmountable fort.  Hirkani took on the risk and reached back to her child in the dark of the night; only for the sake of her child. The king well awarded her valour by naming that part of the Raigad Fort after her name. I am sure there are many stories of such reference in India and abroad.

Women irrespective of being full time homemakers or part time homemakers have always been the housekeepers. Men because of the kind of patriarchal upbringing have always stayed away from lending a helping hand to the lady of the house. Men, often react impertinently when after a long day away from house, they return to a cluttered house and announce their manifested decree:  “Why is the house not cleaned? What where you doing the whole day? Look, my coffee mug is still lying idle at the point I left it in the morning rush”

There is no shying away from the truth – men and more so the Indian men of a patriarchal   mindset drop this statement to the lady of the house not considering her physical or emotional well-being. According to sociology researchers’, housework is a common duty performed by the residing couple/person. It has four dimensions to it: physical, emotional, mental and spiritual. Men do not have to hold their wives or women accountable for the household. It is a joint effort. If they contribute, it definitely does not let down their masculinity.

#atypical homemaker. A hypothesis I would like to state here is: if men go out to work and earn some salary in return then why isn’t the women (full and a part-time home maker) who also performs her duties in the household get her rewards. Their laborious hours are unpaid and unrecognized by the economy. But for a minute imagine if the homemaker is paid wages for the jobs she performs; what a massive impact it will have on the GDP of the country.

Hilary Rosen and Ann Romney, renowed faces of social change in the USA have started a debate by questioning the established – “is the work that a stay-at-home mother does the same as a job? We don’t pay women wages when they care for their own children or clean up their own houses, so our economy doesn’t recognize that work the way it does paid jobs. Yet the work women do in the home has a huge impact on our economy. And it turns out there are some ways to quantify that impact.”

What could be the positive impacts?

But operationally it will be a Herculean task for the planning commission.  The biggest setback is how to measure the productivity of a person who earns no wages? This could be countered by calculating the wages given to the maid for the similar chores she does and then decide on pro-rata base for the homemaker.  The other method  of evaluating their work could be by calculating the opportunity cost.

However both the methods may not be easy to apply. In the first case, the domestic maid agencies’ is an unorganized sector and the state cannot get an exact sense of economics from these workers.  And doing an opportunity cost analysis may sometimes mean comparing apples to oranges. There is also an emotional challenge to putting a price tag to the housework and more so it is  typical to India . Every woman in India takes the home chores as her default job and as “Nishkaam Seva.

Putting a price tag to the household work done may be a difficult task but not impossible. It will bring up the economic well being of the nation and the homemaker. But may be more than the economic revolution a change in the attitude is must. Like many economic revolutions, may be they find a logical way to calculate the value for every chore the homemaker does and then this too sees the light of the day!!