Inspite of being a Woman…

Inspite of being a woman, she says she has zero tolerance for terrorism.

A slew of debates have erupted post Modis comments on a speech while visiting Bangladesh. I was in the audience when I heard it and I remember cringing a bit on this statement. An inner voice rationalized it immediately saying this is political talk where the astute speaker is playing to the corridors; and interestingly I was ok with it.

Since I heard the before and after context of the speech in its entirety, I can safely say that the honourable Prime Minister was in his own way lauding women empowerment. That was his lens of looking at things, where he felt highlighting women for the roles that are not traditionally bound must be applauded. Its another matter that he had temporarily suspended his thoughts to talk about a woman who is his equal in world politics, is a head of a country, and her role demands this action. Its nothing about a man or a woman. 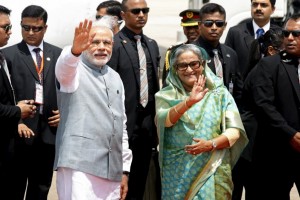 Everyones thinking differs depending on what situations they have been into and what they could perceive from it. The educated bandwagon that I am blogging to maybe purchase cheap keflex doesnt need this encouragement. But have we given a thought to the deep rooted patriarchal society that we live in, especially in rural India and Bangladesh. This could possibly be a motivational statement to push women to move out of traditional roles, structures and decision making. Havent we felt motivated to take on the world when we read about mardaani jhaansi ki raani in our 5thgrade books? Havent we applauded women for bravery, for fighting, for showing her masculinity in a not so feminine world ?

WhileI do work in the space of diversity and inclusion and analyse a lot more on these things than others do; it does connect me to thepoint that inherent bias is bound to surface even if it is polished to a certain level. So interestingly we have a line of public personalities doing a faux pas in this over critical world with respect to women.

There are real and meaningful differences between people and their requirements. Continuous engagement in understanding social and systemic structures is something that we need to collectively look as a society. Failure to develop an open mindedness to each others issues and each one’s perspective could be a moot point. Till then I would encourage people sitting on either side of the fence to be tolerant to each others thoughts.